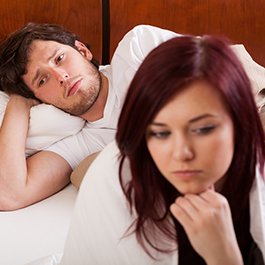 What frigidity is to females, impotence is to males. Inability to perform sex act, or else incomplete performance (say premature ejaculation) or failure to reach orgasm are some of the symptoms that portend male impotency.

These could be either functional or organic. Impotency could either be total or partial. I would like to clear here a misplaced notion all men are not impotent to all women a man may be potent to one woman but the same man may be potent for the other woman. Fantasies play a major role here. Lithe man who is cohabitating a woman who does not measure up to his fancy or fantasied version conception of his ideal woman, he will neither feel excited, nor ejaculate. Not only that, he may not have any penile erection either. If such a person mates his wife, he is simply performing a ritual and formality, as his mind revels in some other woman, and the woman underneath him is not a woman of his choice, desire or fancy.

In sex act, every male has certain ingrained and cherished preferences which, if not agreed to by his wife, drive him to instant turn off. Same also is the case with certain women. Perversions in sex act are choiced preferences and proclivities of many men, and women are also no exception to that. When there is a clash, either partner is bound to have a Turn off, how so ever beautiful or handsome the other partner might be.

Main causes of impotency can be summed up as under:

In addition to the above factors, the foregoing factcrs may also prove causatives of impotency.